Harpers in the Military

September 30, 2012 By Gary in Harper No Comments Tags: harper, military

Like most families, the Harper family had several family members who joined the military and fought in the Boer War, World War I and World War II. Here are some links and information relating to their military service. 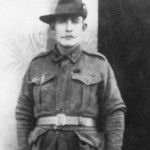 Wilfred, pictured left in WWI uniform with Queen’s South Africa Medal Ribbon served with the 2nd Scottish Horse (Service No. 31632) during the Boer War from Feb 15 1901 to Oct 25 1901. He had enlisted as William Ernest Harper. This is the first instance where he used an alternative middle name. At that time he was married to Annie Maria Smith and had been living at Riddells Creek in Victoria.

His next military service was in 1915 when he enlisted for WWI (Service No. 679). He was now living in South Australia after abandoning his first wife around 1906 or 1907. In his attestation papers he gave his name as Wilfred Ernest Harper , his birthplace as Riddells Creek and noted some experience at the Ouyen Gun Club (his first two children with his second wife were born 1913 and 1914 in Ouyen). He listed his next of kin as ‘Wife Mrs May Harper’. His (second) wife’s name was actually Rachael May Harper, though there is no known record of marriage to her, or of a divorce from his first wife so it may be that he changed some details to avoid some potential legal issues.

On return from WWI Wilfred was allocated a soldier settler block at Red Cliffs. We believe that his twins, Eileen and Evelyn (Evleen) were the first twins born at Redcliffs (in 1921). Wilfred died later that year and his wife, Rachael, was unable to keep the block, due to ‘legal reasons’. It may be that there was no record of marriage and no will, thus no legal basis by which she could inherit the block.

In 1924 the army tried to contact Rachael May Harper regarding his medals. After that letter was returned they then tried to contact his first wife, Annie Maria. It is unknown whether the medals were ever received by either wife.

Christopher was Wilfred’s youngest brother. Born on July 9, 1888 in Riddells Creek, Christopher was 27 when he signed his attestation papers at Melbourne on August 19, 1915. He was 5′ 6″ with brown hair and blue eyes. On his attestation papers he stated his age as 22 and on his medical certificate his age was stated as 27 years 1 month. He was a butcher by trade and his mother was living in Capel Street North Melbourne. His father, Samuel, had died 13 years earlier in 1902.

On May 27 1916 Christopher was assigned to the 2/51st battalion at Tel-El-Kebir in Egypt. His service number was 1658. He then proceeded from Alexandria to Marseilles and joined his battalion at a ‘Railhead’ (possibly at Rouen). On August 16 1916 Christopher was reported as having been wounded in action. His record shows that he had shell shock and was returned to duty the following day.

On September 3 1916 Christopher was killed in action in the field. His body was found and buried by members of the 1st Canadian Pioneer Battalion and his grave was marked with a wooden stake.

We can only imagine how difficult it was for Honora and the many other parents, when all they had left of their child were a few personal effects. On August 7 1917 Honora was give Christophers personal effects – a disc and chain, razor strop, pipe, 3 handkerchiefs and a shaving brush.

Christopher’s name is on the register at the Villers-Bretonneux Memorial in France. His mother received a memorial plaque on October 12, 1922.

Joseph was the second youngest son of Samuel and Honorah. Born at Riddells Creek on 1882, he was 35 years of age when he enlisted with the ‘vetinary section’ in 1917 (service number 1299). His occupation was a labourer and he  was married to Mabel Rose Harper.  Mabel was living at the Capel Street North Melbourne house with Honorah. Joseph was 5′ 7 1/2″ with brown hair and blue eyes.

Joseph embarked at Sydney aboard the HMAT Port Darwin on April 30, 1918 and and arrived at Suez on July 7 1918. He then went to Moascar (Egypt) where he was admitted to hospital with malaria.

Joseph returned to Australia aboard the Dongala on August 25 1919.