I’d had this photo of what appears to be a double wedding for a few years and decided to see if I could work out who it was. Back in September last year I posted to a genealogy group on Facebook to see if anyone could date it roughly, based on what the people were wearing and the uniforms. In the end there were 92 comments in total with some saying it was around WW1 and some saying it was around WW2 and some saying it looked like it was in Australia whilst other said it could be in England. I had felt, since just after I got the photo, that it was Edward Trew and Ellen Mortimer. The wedding couple on the right were what made me think that – they guy looked like Edward Trew.

Military records had previously revealed that Edward had married Ellen in England after spending some time in hospital due to war wounds in WW1. 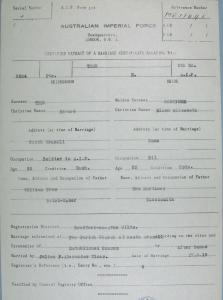 Edward had been wounded in action in October 1917 and spent some weeks in hospital. He had returned to the front in November 1917 and then back to hospital in August 1918 suffering from gas poisoning. He met Ellen whilst in England (perhaps she was a nurse) and they married on August 27 1919.

With that thought in mind I started looking at Ellen’s brothers and sisters. Surprise, surprise… I found this record:

Edith was Ellen’s older sister and she was married in the same town and on the same date. So here is the photo with Edward and Ellen being the newlyweds on the right. The original photo was sepia, so I had my daughter sharpen it up a bit (click the image for full size).