In 1841 Andrew Harper and his wife, Maria (nee Gleghorn) migrated from Templepatrick, Ireland and arrived in Australia on a ship named ‘Marquis of Bute‘. They were accompanied by their three young boys – Paul (6), Samuel (4) and Henry (9mths).

On Wednesday August 11 1841 the Marquis of Bute  departed from Greenock which lies on the south bank of the Clyde river in the west central lowlands of Scotland. The Marquis of Bute carried a total of 148 families, mostly bounty immigrants. “Bounty immigrants” were selected by colonists who then paid for their passage. When the immigrant arrived, the colonist would employ them and the colonist would then be reimbursed by the government for all or part of the cost of passage.

A court case involving Andrew and his son Paul was mentioned in the Ballarat Star on Thursday Feb 3, 1859:

“Henderson and Party v Harper, for £93 10s.—Mr Wallace for plaintiff, Mr Burton for defendant. This case was for timber supplied to defendant by plaintiff and his partners, who were the sons of defendant — his two partners kept the books and would not settle with him. Henderson examined, proved the delivery and value of the timber, and not securing any money on account of it, on cross examination this witness was very obscure as to his dealings with defendant, during the time receiving provisions, but not able to state about or how much. For the defence. Andrew Harper examined— denied any liability that he either ordered the timber, or received any money on account, neither had he supplied plaintiff with provisions, he only received a commission amounting to £2 10s for effecting sales, and that he had no other transactions with defendant. Paul Harper, who was joined in the plaint, and a son of defendant, proved that defendant had no interest in the timber beyond receiving a commission for selling. His Honor gave a verdict for defendant, remarking that the action lay against the sons as co-partners.”

Andrew died on June 1, 1882 in Ballarat. There was an inquest held and it was determined that the cause of death was asphyxia. His death was also mentioned in the Kilmore Free Press on Thursday, June 8, 1882:

“At Ballarat, on Thursday, Andrew Harper died suddenly whilst taking his tea at the Carriers’ Arms Hotel. An inquiry subsequently held showed he had choked himself with a piece of meat.”

Maria, Andrew’s wife, had died in tragic circumstances in 1859. Here is an excerpt for the ‘Ballarat Star’ on Tuesday 26 July 1859:

“The inquest on Maria Harper, whose death we chronicled in our last issue, took place before the District Coroner at the Dean Inn, on Monday, 25th inst. Andrew Harper, the husband of deceased deposed to his son Henry coming to him in the Forest on Saturday afternoon with the news that his mother was burned to death. On returning home he found deceased lying on the floor of the hut, quite dead, being dreadfully burned over nearly the whole of her body. The clothes about her shoulders were still smouldering when the son first discovered her. No evidence was given which accounted for the manner in which the accident happened, and the jury returned a verdict of death by burning, believed to have been caused by the clothes ‘ of deceased having accidentally caught fire.” 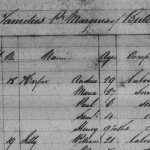